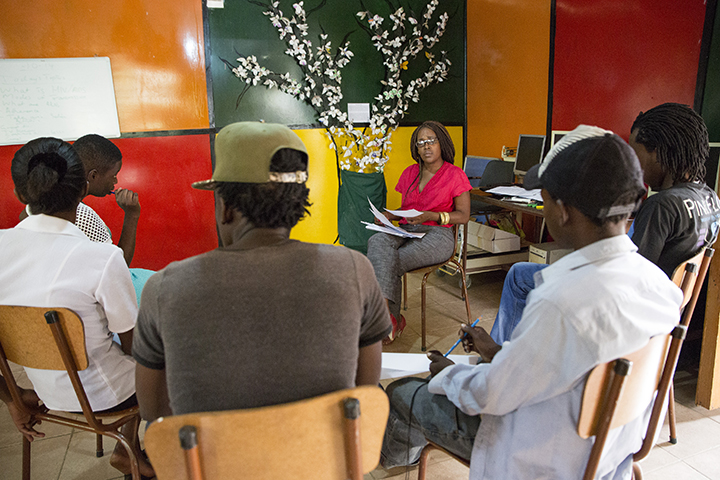 Therapy is the first time that many have talked about their HIV story.

They are falling in love for the first time, rebelling against the older generation, and seeking out their own path — adolescence rocks a young person’s world to its foundations. The teenagers in treatment at Newlands Clinic are no exception, but for them, life is even more difficult. Not only are they HIV-positive, which is a huge taboo and requires a lifetime of treatment, but also, in most cases, they live in very difficult circumstances. Many of them have lost their parents to Aids, and live in a home or with relatives. What’s more, the high rate of unemployment in Zimbabwe means that their prospects for the future are bleak.

At Newlands Clinic, these young people not only receive medical support, but are also treated with care and respect. “Our Clinic is a home for the homeless”, says nurse Farai Rusinga, who treats children and teenagers. His work is his world, and he regularly arrives at the Clinic extra-early to ensure that his charges get to school on time after their check-up.  “Many are so sick when they start treatment that they haven’t been able to go to their lessons”, he explains. Fortunately, that changes quickly. “In general, after a few months of treatment they will be strong enough again.” In addition to their HIV medication, these patients are given a vitamin-rich porridge to build them up. The Clinic will also help if they don’t have the money for food or for school. The most important things, however, are understanding and trust. “Whether good or bad, they bring everything that they’re experiencing with them to the Clinic. We listen to them, and we don’t judge”, says Farai Rusinga — known to all as ‘Uncle Farai’.

Struggling with a lifetime of treatment

This relationship of trust is especially valuable during adolescence, because that is when patients begin to understand the full implications of their HIV infection, and that they will have to take medication all of their lives. “Many feel betrayed by their parents, and want to know who’s responsible for their infection”, according to Farai Rusinga. Things are compounded by their fears for the future. Questions such as “will I be able to get married?”, “will my children also be HIV-positive?”, and “what will happen if my girlfriend or boyfriend finds out about my HIV status?” are common.

A lack of support, a loss of hope, and anxiety, are the principal reasons that many young people stop taking their medication regularly. That is highly dangerous, because the virus is then able to replicate quickly and uncontrolled, and in many cases becomes resistant to treatment. If the regular blood test shows up an elevated viral load, action must be taken fast. That’s where psychologist Bahati Kasimonje also comes in.

“The mental health of our patients has a major influence on their HIV treatment”, she explains. Young people who have not been adhering sufficiently to their treatment plan receive support in an eight-week group therapy programme. And it is proving highly successful. “Our evaluations show that all of the young people who attended at least three- quarters of the therapy sessions have a fully suppressed viral load one year later”, says Bahati Kasimonje. This means that HIV can no longer be detected in their blood, and that they are no longer contagious. The rate among those who did not benefit from group therapy was just 40 per cent. Other patients are forced to switch to other, more expensive medications that are subject to limited availability in Zimbabwe. “People often think that it’s just about taking a couple of pills”, says the psychologist. “But if we don’t take these young people’s problems seriously, resistance to treatment will just increase.” During the sessions, she explains the connection between adherence and viral load in precise detail, and also highlights the fact that not all forms of medication are available in Zimbabwe.“We then move on to developing ideas within the group about how they can improve their adherence to treatment”, says Bahati Kasimonje. Key issues are the taboos surrounding HIV and Aids, disclosure of their HIV status, and sexuality and relationships.

“Our therapy sessions are often the first time that most of our patients have talked about their personal HIV story”, Bahati Kasimonje explains. The weight of not being able to share their lived experiences of HIV is so enormous that many of them are not able to speak even to family members or friends, and they hide their medication. There is also a small adolescent corner in the Clinic's grounds. Some patients come every day, because they are left to fend for themselves, and do not have a job. This gives most of these young people a network of friends to carry them through their difficult adolescent years. As Farai Rusinga says: “Seeing orphaned children become independent young men and women is the best reward for our work.”