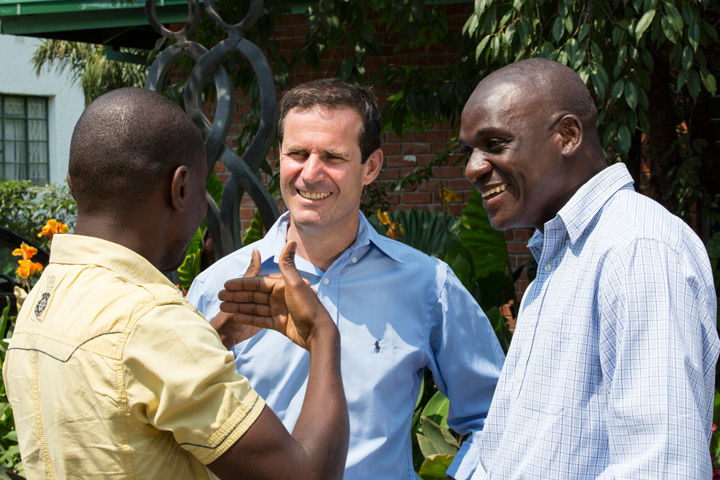 Matthias Widmaier, you’ve been in Harare for nine months now. What sticks in your mind if you think back to your first day at Newlands Clinic?
No question about it, the cheerful and exuberant welcome from the entire team, with clapping and singing. It was like a little celebration, and totally unexpected!

You’ve been living in Africa since 2003. What prompted you to move there? Are you driven by a spirit of adventure?
Back then, our whole family decided to move to Uganda. My ex-wife already had a connection to the continent having studied African languages, and we’d spent six months together in Ghana. Of course, there was a certain sense of adventure about it as well: we wanted to get to know new countries and cultures, to learn from them, and also to give something back. Taking the broader view is something that’s very important to me.

From Uganda to Zimbabwe: how big a change has that been?
The people in both countries are very friendly and warm-hearted. However, one big difference is that while Uganda has stabilised somewhat over recent years following a period of utter chaos, many parts of the Zimbabwean population have seen better times. This is also reflected in people’s satisfaction levels, which are higher in Uganda. In terms of infrastructure, though, Zimbabwe is in much better shape, especially when it comes to road traffic and the associated dangers.

What prompted you to take on the position as Country Director at Newlands Clinic?
After ten years in Uganda and two successful projects, it was time for a change since my previous employer, CBM, allocates deployments abroad on a rota basis. I had the choice of going back to Germany or staying abroad. Ultimately, the offer from Harare was very attractive: it was the most diverse in terms of content, and both the project itself and Ruedi Lüthy as a person are an inspiration.

And what surprised you the most?
The high level of personal motivation among the staff, which is well above the norm. Ruedi Lüthy has done very well there!

Did you already have experience with the issue of HIV?
In Uganda, I worked with disabled people and their rehabilitation. Of course, many of those patients had HIV, but I had less to do with that issue given that I worked in administration. That’s why I am gaining so much now by being able to work in this field on a daily basis, and I’m learning new things all the time. This is an absolutely essential part of maintaining the day-to-day motivation to provide proper leadership.

Has there been a particular highlight in the first few months?
The first few months as a whole were a highlight, from the interaction with the team and the respect that shapes the working environment in Zimbabwe and Switzerland alike. What’s very important for me are the discussions and dealings with the staff and the visits to the patient area. This really helps in keeping things real, and maintaining a sense of perspective. Another highlight is the weekly meetings, mostly with the medical staff, where problems are discussed openly and properly, but with a good deal of humour as well.

What goals have you set yourself for 2015?
I want to continue to settle in here, and by the end of the year I want to have an understanding of all the different pieces that go together to make up the clinic and the foundation in Switzerland. I’ve also been travelling in the past few months to get to know the country and the people better. That’s crucial for getting established. I would say I’m about 90% settled in now.